On Wednesday, Amy Cooper and Christy Perky led the choristers in a Zoom call choir practice. These elementary schoolers were planning to debut a new musical The Truth About Ruth, for the Sunday after Easter. This musical by our own Christy and Amy will be great when we can once again sing together. Amy told our disappointed young people, “The word of God never gets old or outdated, and Ruth will be ready and waiting for us.”

In the fifth grade I sang a solo during Cool in the Furnace. Nervous about the solo, I rehearsed my lines well enough to remember them today. “This is a story that you ought to know about” four friends – Daniel, Hananiah, Mishael, and Azariah. Scholars say these folk tales were written down 300 years after the events during a time of terrible Jewish persecution.  The folktales tell how Daniel, Hananiah,Mishael, and Azariah overcome national humiliation, genocide, a den of lions, a fiery furnace, and a cruel king. They will be thrown into the fiery furnace for refusing to bow to King Nebuchadnezzar’s golden idol. The power-mad king will heat the fiery furnace seven times hotter than ever before. My fifth grade singing debut recounted: “That furnace was hot and burning red; they thought we’d burn like homemade bread;. but we didn’t burn and we didn’t run, and God just smiled and said, ‘Well done’”.  It isn’t hot.. (walking bass line)…(tissh) in the furnace. Man! this furnace is cool, cool, cool, cool.” When the three friends walk out of the fiery furnace, unfazed, eyebrows intact, without even the smell of smoke in their hair, King Nebuchadnezzar relented and signed a law separating state and church a tad. 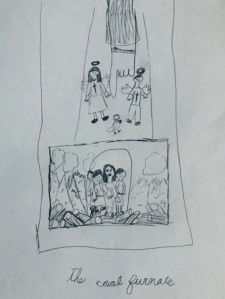 (Art work by Caroline. She drew as I preached! Pretty cool way to process a message.)

As a kid bullied by one teacher and some classmates  for my dyslexia, Cool In The Furnace captured my imagination reminding me that God was with me my little fiery fourth grade furnace.  But, there were deeper lessons inside those tales from the Babylonian Exile. The fiery furnace of Babylonian Exile would fundamentally change Judaism.

In 587 BCE,  Babylon destroyed Jerusalem and the Temple.  Nebuchadnezzar literally placed the crowns of vanquished kings and idols of conquered gods in his Babylonian trophy case. Without idols to the Jewish “God”, Nebuchadnezzar placed golden chalices and bowls in his gallery of conquered gods. With the Jerusalem Temple gone, the Jewish people could no longer come together for Passover or the Day of Atonement. There was no altar on which to make atonement their sins. How could they praise God in a strange new land? (Psalm 137) Does faith falter when stripped of its outer expressions? This week, Heather reminded our staff that the first Easter came to people scattered and locked behind closed doors!

Daniel, Hananiah,Mishael, and Azariah suffered much personal loss.  Nebuchadnezzar grabbed the top students from Vanderbilt, Belmont and TSU and carried them back to Babylon for a three year program in something like our history of Indian Schools. They changed their names, languages and customs.  What will happen to faith? Who will Daniel, Hananiah,Mishael, and Azariah become? How can we know how a time of profound change will change us? We know things have changed. How will we change? What will we learn from this pandemic?  Will we make more swords or invest in new plows? Will we build more walls or more hospitals? Will we make religious progress or long for the past? Will we allow God to make something new in us?

The storyteller says in 1:8, “Daniel decided that he wouldn’t pollute himself with the king’s rations or the royal wine.” That is so brassy!  Daniel, far from home, renamed  Belteshazzar, denied his mother tongue, and forced into royal service, politely asks for a half-way kosher diet.  Surely Nebuchadnezzar did not provide a kosher chef! Did you notice that Daniel is not some religious jerk? “Daniel appealed to the chief official in hopes that he wouldn’t have to do so.”    Daniel appeals, hopes and bargains for a ten day deal! Something about Daniel’s goodness creates a sense of “faithful loyalty between Daniel and the chief official”.  Even as everything has changed, these four teenage friends innovate and adjust and thereby hold onto God.  Remember that God expressed as Creator, Redeemer, and Sustainer makes all things new (Isaiah 43:19; Matthew 9:16; Revelations 21:5; 2 Corinthians 5:17; Galatians 6:11). God is always creating, innovating and growing new life in even our worst moments. God is Love. Love never harms. Yet, God is always adapting: bringing life from death!  Will we be open enough to become new creations?

In Daniel 6:10, the narrator tells how “...three times a day, Daniel went to his house, opened his upper room windows, faced Jerusalem, knelt down, prayed, and praised God…. just like he always did.” Just like they always did, but without a temple. God makes a new way, a road in the wilderness, a shoot from a burned out stump. Daniel is isolated by the diaspora’s distance and destruction, but Daniel persists.

Friends, the Bible is a story of change, innovation, and new starts. After Eden’s garden comes knowledge and sacrifice.  After a flood God sends a rainbow. After slavery God sends Moses, the Passover and Ten Commandments. Because of kings God sends prophets.  After the temple God creates synagogues. After the cross God brings Easter. After Pentecost God welcomes everyone. After a persecution Phillip welcomes eunuchs. After a dream Peter baptized Gentiles. After a lighting strike Paul commissions women. God is always making a new way. Will we get in step with the Spirit or cling to an un-examined past?

Will we dwell with God, each other, and this new reality long enough to allow God  to create something new in us? Times were bad. Jerusalem was destroyed. The people were dispersed. But: God is always making all things new! God somehow concocted a more vibrant faith from the mess of 587BCE.  In the exile, a richer, deeper and more engaged faith arose. With the temple Tapestries hanging in Nebuchadnezzar’s guest bedroom, four teens pioneered a faith rooted in prayer, scripture, community, and ethics. Instead of one national temple, synagogues of ten faithful seekers adapted faith within a broken world.  Biblical and Rabbinic scholarship did not end but thrived in Babylon, producing works like Deuteronomy. Even years later, when King Herod rebuilt the Jerusalem Temple, Jesus blossomed and innovated inside a faith perfected in the exile. Christians practice faith practices forged in Babylon. We do not look to a temple, high priest, or national altar. We do faith through community,  prayer, study, and just actions. Who could have guessed at the time that the adaptations made by four teenagers living through terrible times would deeply shape the faith we practice today.

I wonder what Mary, Magdalene, Joanna, and Susanna thought would happen as they stood weeping beneath Jesus’ cross? Do you think on Good Friday that Peter imagined that a symbol of state sponsored cruelty and death would come to symbolize faith, hope and love?  Behold, God says I am making all things new. God is working through us to heal this world.

This pandemic is changing us. There are lessons to learn, but we do not know what they are yet.  Will we make progress or reheat old habits? Do we believe God might make us new?

As Kate, Darren, Heather, and I brainstormed together around worship, I took notes. I type slowly so I only got sound bites, but these phrases seemed like verse. So I close with phrases hatched by our clergy.

This is a season of enforced Lent

Be still. Be careful. Be present.

Do not rush to judgment. Do not hurry to fill up your empty time.

Prayer.  Be intentional. Be open to a new thing.

We will be changed by this.  We do not know how.

There is fear and loss. Grief and injustice.

Deliver us from evil, death dealing, and despair.

How terrible would it be if “everything went back to normal?”

We were over scheduled, rushed, distracted, and divided.

There are lessons to learn. Do research. Start planning.  Avoid disasters.

What are our guns, walls, divisions achieving?

Be still. Be calm. Be rational. Be ready to become something new.

Let us not miss this chance to change.

Take this moment. Slow down. Be here.

Practice solitude. Be where you are.

Call a friend. Wave to a stranger.  Send comfort.

Learn. Love. Be ready to become something new.